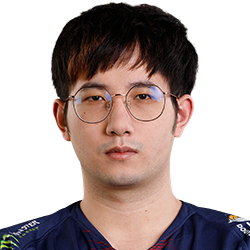 Also known as “prince-fy”, fy is considered to be among the most individually skilled players in the world. Famous for strong performances on his Rubick, fy has been at the top of the scene for years now. He’s known to have high impact in games and tends to stand out. Having spent his entire career with the Vici Gaming brand, fy is closely tied to the organization's success and has even been the team’s captain for a while. Aside form his Rubick, fy is also known for his Io and Bounty Hunter.